Bugajski in The Wall Street Journal on Russia’s Elections 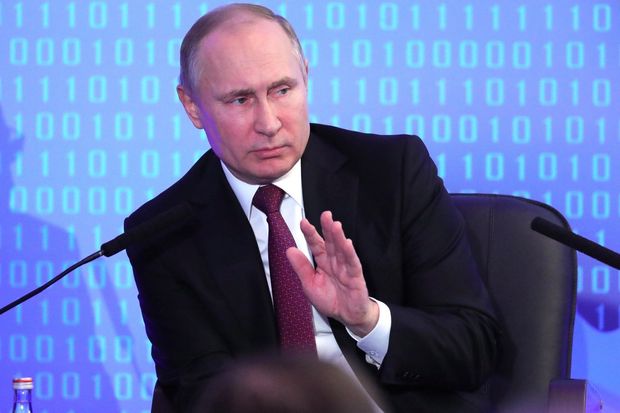 The Central Intelligence Agency has reported that Moscow is preparing to interfere in November’s midterm elections. On the theory that the best defense is a good offense, why shouldn’t Washington consider launching a cyberoffensive against the Kremlin? A targeted onslaught could disrupt the stability of Vladimir Putin’s regime.

Russia faces a presidential election March 18. The result is already decided— Mr. Putin will win—but the country is vulnerable to cyberpenetration. A key component of a covert assault would be to hack and disseminate official Russian communications, with a focus on the Kremlin, government ministries, Parliament, key businesses and subservient political parties, as well as private correspondence between officials.

Although the regime controls the major media outlets, potentially incendiary leaks can be circulated through social media, a favorite instrument of Kremlin disinformation in the West. The objective would be to disclose publicly the most provocative scandals of Russia’s top officials and the extent of their corrupt governance, opulent lifestyles, public lies, and contempt for ordinary citizens.

Especially valuable would be messages that reveal the willingness of officials, oligarchs and bureaucrats to betray the country for personal gain. Western intelligence services certainly possess more comprehensive information about the theft of the Russian budget than does even Alexei Navalny, the anticorruption campaigner barred from standing in the election.

A U.S. offensive could be extended beyond the election as part of a broader psychological influence operation. Such a strategy would have two core objectives: alienating the public from the regime and provoking power struggles inside the ruling stratum. Detailed revelations about official treason and financial abuse can fuel social, ethnic, regional and religious unrest—especially as living standards for the masses continue to plunge. Regime change would then become the responsibility of the exploited and manipulated Russian citizens.

Simultaneously, disclosures about conflicts within the ruling elite would generate uncertainty and anxiety in government circles and expose the regime’s political vulnerabilities. Even if that doesn’t immediately precipitate Mr. Putin’s downfall, it could help divert the Kremlin from its unchallenged cyberwar against Western democracies.

Some will caution that such an offensive against Moscow would be provocative and would escalate disputes between the U.S. and Russia. The Kremlin, however, perceives the lack of an effective U.S. response to its election meddling as weakness and vulnerability. The assault on American democracy continues to this day primarily because of an inadequate counterattack and the limited impact of financial sanctions against Russian officials.

Besides, Moscow will accuse America of interfering in its elections anyway. Washington might as well accomplish something.

Mr. Bugajski is a senior fellow at the Center for European Policy Analysis in Washington and co-author, with Margarita Assenova, of “Eurasian Disunion: Russia’s Vulnerable Flanks” (Jamestown Foundation, 2016).